A few days ago Humans of New York’s Brandon Stanton interviewed a young boy who talked about his family’s allowance system. This post attracted a lot of attention; many people responded positively to the way the parents were cultivating a hands-on approach to their children’s financial education. The boy explained: “Every week I get one dollar for allowance. Then I get to choose the section where I put my dollar. There are four sections: spend, save, donate, and invest. If I put a dollar in the ‘invest section,’ my parents give me two extra pennies at the end of every month. I’ve only used my ‘spend section’ twice! I have way over $10 in my ‘invest section.’ I used to have more but I took some money out and put it in my ‘donate section.’ We used it to buy food for people who don’t have much money in their ‘spend section.’

As someone who works in the financial advisory business, as well as being a parent of three children (ages 10, 9 and 6), I am always interested in hearing about ways to steer my kids toward making smart money choices. When I saw the Humans of New York post I thought about the sectioned piggy banks I’d seen a few years ago and I looked them up again. I found one that looks just right for my kids. This is NOT a sponsored post; I just found these banks and thought they were pretty neat. 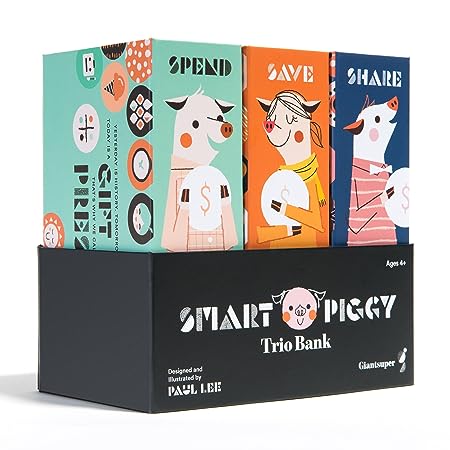 While on the topic of Money and Kids, I read a tip years ago about spending money for special events. The tip was…when you go somewhere with your kids, somewhere that they’re going to want to spend money (and you’re okay with them spending some), give them the money upfront and tell them that whatever is left over is theirs to keep. The reasoning is: You are prepared to spend that money anyway, and if the kids view the money as “theirs,” they tend to be more careful about spending it. It’s painless to spend Mom’s money, but they might pause and think things over when the money comes from their own pockets.

This sounded a little crazy to me at first, but I tried it, and it worked like a charm. Before employing this trick, we’d go somewhere, like a carnival or the mall, and the kids would ask for things left and right, without a natural stopping point. “Can I do this? How about this? Can I have an ice cream? How about a cotton candy?” It was difficult to try to keep things “even” among the three kids, and it felt uncomfortable and frantic to be constantly pestered with requests. But I could also see where the kids were coming from – they weren’t trying to take advantage as much as they felt “You don’t know unless you ask.” If I said No to one purchase, they’d move on to the next thing.

I tried the tip at a school event, where the kids had access to a snack stand as well as their beloved school store (where everything was a dollar or less). I gave each child $3 and told them that they could spend it however they wished, and if they had anything left over they could keep it. Not only did they love being in charge of their own money, but it immediately took some weight off me. They reacted very typically to their own personalities. My oldest took his time walking around and making decisions, coming back to the tables a few times to make sure he was making the best decisions. He spent his money slowly throughout the evening, but he spent it all. My middle child spent her money right away in a gleeful burst of sugary treats and erasers that smell like bubble gum. My youngest bought several small items (the fifty-cent lollipop was worth it to her, but the dollar juice box was not – she used the water fountain instead). She came home with some leftover money, which she happily added to her bank.

What was nice about this method was that the kids understood that when their money was gone, it was gone. They managed it on their own (and I worked hard to let them make their own spending decisions, without inserting my opinion where it wasn’t needed). No one asked me for anything that night – which was a welcome relief to me. And, honestly, the $9 I spent was probably less than I would have spent otherwise, because it’s harder to keep track when you’re shelling out dollars on the fly. Consider me converted!

Do you have any tricks that help kids learn how to handle money? If so, I’d love to hear them! Email me with any suggestions, or let me know what has worked for you.